How 2,000+ Donors Opened Doors for Hundreds of Students

With its 2017 #MULEMENTUM campaign, Muhlenberg College faced its highest day of giving goal ever. To help engage students, alumni, parents, and the rest of the campus community, Muhlenberg turned to the higher ed web design and crowdfunding team at KDG for the fifth time in a row.

For the first time ever, #MULEMENTUM was extended for three additional hours to make it easier for Muhlenberg’s many West Coast alumni to help open some doors.

Social media played a huge role in the campaign’s success. All day, donors tagged their Twitter, Instagram, and Facebook posts with #MULEMENTUM to help spread the word. 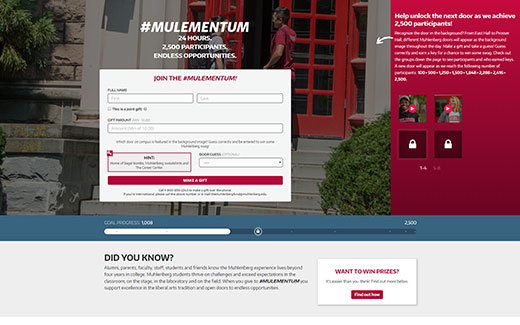 As always, KDG and Muhlenberg worked to find a crowdfunding theme that would bring the entire campus community together in a fun and engaging way. They decided on the concept of opening doors, not only because the Muhlenberg campus is known for its iconic red doors, but also because the college has been opening doors for students from around the world for well over 150 years.

"We have the best alumni in the world. We have a great volunteer corps. It's really just a way for us to interact with them and get them excited about the college. "

KDG designed a giving portal that was not only simple, but also engaging. Donors were broken up into separate groups: alumni, students, parents, faculty, and friends. Prior to donating, they were shown an image of one of campus’s iconic doors. In order to see a hint and guess the door, they had to donate.Those who guessed correctly were awarded digital keys for their group, which resulted in a friendly competition throughout the day. (Alumni ultimately came out on top!)

Whenever donor goals were met, exclusive campus videos were released. However, there were more than just online prizes for donors. There were plenty of on-campus prizes and activities as well! On-campus donors could spin a prize wheel in the student union for the chance to win tons of great Muhlenberg swag, while the school’s cheerleaders and mascot kept the excitement going throughout the day. In less than 24 hours, Muhlenberg had exceeded its goal and opened doors for countless future students.

Alumni and students faced off in a battle of the classes. Stats were updated in real time.

With a custom admin panel, Muhlenberg could see who donated at any point throughout the day.

The form was simple and quick to fill out. It was even optimized for mobile on-the-go giving.

We couldn’t do this without KDG. The website is so good. It looks fantastic.

They [KDG] have been killer through their customer support through our very hectic 24-hour period.

Managing Thousands of Leads without Missing a Beat

Building a New Website for a New Generation of Learners

Keeping Technology Up to Date, Streamlined, and Secure